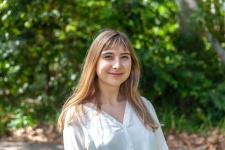 Bethan grew up in the UK, where she completed her BSc (hons) degree in Biology at Oxford Brookes University, before commencing an MSc in Ecology, Evolution and Conservation at Imperial College London. She first became fascinated by the infamous crown-of-thorns starfish (CoTS) while completing her undergraduate project on their distribution and feeding habits in the Wakatobi Marine National Park in Indonesia. Bethan is now studying for a PhD under the supervision of Prof. Morgan Pratchett (primary), Prof. Andrew Hoey, Dr. Sven Uthicke (AIMS), Dr Jennifer Donelson and Dr. Ciemon Caballes in the ARC Centre of Excellence for Coral Reef Studies, investigating the effect of ocean warming on CoTS. She hopes that her work will aid our understanding of the future population dynamics of the starfish, and the threat they may pose to the reef under further climate change.

The effect of ocean warming on the behaviour and physiology of crown-of-thorns starfish (CoTS, Acanthaster cf. solaris).

The combined threats of CoTS outbreaks and temperature-induced coral bleaching are reducing the resilience of the Great Barrier Reef. However, little is known about how CoTS populations may fare in a warmer ocean. This project seeks to determine the effect of warming on CoTS throughout their life cycle.

This project is of high importance, considering that CoTS and climate change are two of the greatest threats to the Great Barrier Reef. Understanding the effect of warming, will aid predictions regarding their future population density and distribution, and the cumulative or synergistic threats they may pose to the reef under further climate change.

Chapter 1. I am currently preparing a meta-analysis exploring the effect of warming on echinoderms, which involves the compilation of 85 studies observing various measures of fitness and performance. I am looking for patterns in the responses using multivariate mixed effects models, which include moderators, such as trait type, life stage, latitude and habitat to observe how these factors influence thermal sensitivity.
Chapter 2. I explored the effect of acute thermal exposure on CoTS performance using intermittent-flow respirometry in order to measure the metabolic rate over a wide temperature range. In addition, I gained a mechanistic understanding of the observed organism level responses by measuring the activity of enzymes, that are proxies for aerobic (citrate synthase) and anaerobic (lactate dehydrogenase) metabolism in CoTS over a similarly wide thermal range. This was conducted using spectrophotometry.
Chapter 3. I examined the effect of prolonged thermal exposure on CoTS performance by exposing starfish to four different thermal regimes, and assessing various measures of activity, metabolic rate (again using intermittent-flow respirometry) and mortality, at various timepoints.
Chapter 4. I am currently exploring how warming influences settlement success and post-settlement survival. This is the process of swimming CoTS larvae attaching themselves to substrate, where they metamorphosise into juvenile CoTS. I am testing this at four temperatures, using crustose coralline algae as a settlement cue.

Chapter 2. In sub-adult and adult CoTS, citrate synthase activity declined with increasing temperature from 15 °C to 40 °C, with negligible activity occurring from 35 °C. On the other hand, lactate dehydrogenase activity increased with temperature from 20 °C to 45 °C, indicating a greater reliance on anaerobic metabolism in a warmer environment. The standard metabolic rate of sub-adult starfish increased with temperature throughout the testing range (24 °C to 36 °C). Adult starfish exhibited evidence of thermal stress, with metabolic depression occurring from 33 °C.
Chapter 3. We found that temperature significantly affected movement rate. The movement rate of starfish increased across the 26 to 30 °C range, with those at 28 °C and 30 °C moving 18% and 27% faster than those at the control temperature. Similarly, the standard metabolic rate of starfish increased from 26 to 30 °C, with metabolism 100% and 260% faster at 28 °C and 30 °C compared to the control. At 32 °C, individual starfish exhibited a 14% slower movement rate, a 33% slower metabolic rate, and also had a 4-fold lower probability of survival than those at 30 °C. These results indicate that 32 °C is above the thermal optimum for crown-of-thorns starfish.