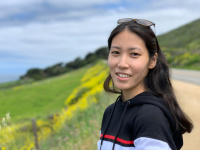 Julia grew up in Taiwan, where she found her passion for marine biology. She moved to Australia in 2016 to pursue her MSc in Marine biology and ecology at James Cook University. She has since been engaged in several research projects at James Cook University and ARC Centre of Excellence Coral Reef Studies. During her time working with A/Prof David Bourne, she has developed an interest in the coral microbiome and coral disease. Julia is currently conducting her PhD project under the joint supervision of A/Prof. David Bourne, Prof. David Miller and Dr. Ira Cooke. Her research focuses on investigating the microbial and coral interactions during the progression of Black Band Disease lesions.

This project aims to provide insight into the metabolic and genomic mechanisms of the microbial and coral host that drives Black Band Disease (BBD) progression. Firstly, this project will investigate the molecular mechanism of the cyanobacterium and associated microbial community that facilitates sulfide tolerance at the lesion. In addition, this project will provide insight into the systemic host immune response toward BBD infection by profiling the gene and metabolic expression of host tissues at defined sites away from the progressing lesion front.

BBD is characterized as a cyanobacteria-dominated microbial mat that migrates across the coral colony killing underlying tissue rapidly and causing significant mortality in coral populations during outbreaks. BBD infection is the result of complex interactions between the causative agents, the host response, and the surrounding environment. The BBD lesion maintains a sulfide-rich and anoxic environment which appears to have a systemic response on the coral host, allowing repeat infections and cumulative impacts measured through greater tissue loss. How these host and microbial factors interact during the onset and progression of BBD and across gradients is poorly understood. Through understanding both microbial and host factors that cause coral disease at the gene and cellular levels, only then can realistic management options for controlling diseases be implemented.

The project will involve ‘omics’ techniques to elucidate the gene expression and metabolic network that drives BBD progression. Specifically, transcriptomics approach will be used to profile the microbial gene expression under the sulfide-rich environment and causing disease virulence. Transcriptomics and metabolomics approaches will be used to characterize the host immune response through experimental disease infection studies.

Julia hopes to understand both microbial and host factors in order to underpin BBD aetiology, which is vital for managing disease outbreak in the future. The outcome of this project will empirically confirm the roles of the cyanobacterium and the microbial community associated with BBD. Furthermore, the outcome of this project will provide the novel insight of coral immune response to the BBD infection.