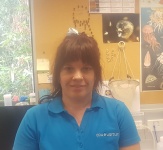 PhD
College of Medicine and Dentistry

Katrina is currently in the midst of her PhD exploring at the impacts of bleaching on the venom ecology of cnidarians, under the guidance of Professor Jamie Seymour and Dr Robert Courtney in the Tropical Australian Stinger Research Unit at James Cook University. Whilst devoted to her array of cnidarians, Katrina also has a soft spot towards echinoderms, stemming from her honors research whereby she investigated the impacts of microplastic on sea urchin larvae.

Impacts of bleaching on the venom ecology of a tropical cnidarian

Using a small tropical sea anemone (Family: Actiniidae), this project aims to elucidate the impacts that bleaching stress has on cnidarian venom ecology. Specifically, through comparisons of bleached and unbleached individuals, this project aims to determine how each of the key aspects of a cnidarians' venom ecology; nematocysts, venom composition, and venom toxicity will be impacted by bleaching stress. To this end, this project ultimately seeks to provide valuable insights into not only how cnidarians are, and will, continue to be impacted by bleaching, but also how such changes may impact the broader reef ecosystems.

To date, no study has extensively looked how each of the key aspects of a cnidarians venom ecology, nematocysts, venom composition, and venom toxicity, are impacted concurrently (Kaposi et al., 2022). As this project seeks take a wholistic approach in determining how venom ecology may be impacted, it is thus anticipated to be the most comprehensive of its kind in this emerging field to date. It is important to understand the effects that bleaching may have on this important aspect of their ecology as it may have unforeseen impacts on not only their direct survival, but on the wider ecosystem and species that rely on cnidarians for food and habitat.

Temperature manipulation (34 ⁰C) will be used to induce bleaching in forty-five similarly sized sea anemones (Family: Actiniidae), whilst a further forty-five specimens from the same population will be kept in a healthy state of symbiosis (29 ⁰C). Within each treatment, sea anemones will be divided equally across five independent tanks (non-flow through).After a five-day stress period, bleaching will be confirmed in one sea anemone per replicate, as a significant reduction in symbiont density (algae cells per gram of tissue), determined with ANOVA with repeated measures, from data collected at the start and end of the stress period. Once the occurrence of significant bleaching has been confirmed, treatment conditions will be returned to control conditions (29⁰C). To prevent recolonization of Symbiodinium sp., bleached animals, will be held in darkness for ten days. Ten days was selected to encompass the predicted time it would take for the sea anemones to generate new nematocysts (Bode & Flick, 1976). At ten-day, post-stress period, seven of the remaining sea anemones within each replicate will be randomly split into three groups, whereby each group will be used conduct one of the main sampling activities. The final sea anemone is to act as a spare which can be substituted in case of mortality.Additionally, the DNA of Symbiodinium sp. present within this species will be extracted and identified via polymerase chain reaction (PCR) and SANGER sequencing by Australian Genome Research Facility. Given that different Symbiodinium types have different thermotolerances, influencing the cnidarian’s bleaching tolerance (Quigley et al., 2018), identification of the symbiont type is strongly recommended and is recognised as an important tool in increasing the comparability between bleaching studies (Grottoli et al., 2020).Nematocysts:
To determine the effect that bleaching has on nematocysts, one sea anemone from each replicate tank will be anesthetized and fixed in 10% formalin with sea water. Fixed specimens will then be dissected and small tissue samples from 4 body regions (tentacles, pharynx, mesentery filaments and body column) will be microscopically inspected (x 630). Nematocyst types will be identified based on morphological characteristics of undischarged and discharged capsules following descriptions by (England, 1991). Where possible, the first 300 nematocysts encountered within each tissue type will be classified and the percentage of each nematocysts type present within each tissue will be determined. Additionally, where possible, 100 of each nematocyst type within each tissue type will be photographed and measured for length and width. The occurrence of abnormal nematocysts (deformed/bent capsules) will also be noted. A univariate statistical analysis (ANOVA) will be done in SPSS, with Tukey’s post hoc to assess differences in the types and size of nematocysts between bleached and unbleached sea anemones, testing the null hypothesis; bleaching does not affect nematocysts.
Venom composition:
Due to the volume of venom required for analysis, to test whether bleaching impacts on venom composition, three sea anemones from each replicate tank will be sampled and have their venom pooled. Simply, nematocysts will be isolated from epidermal tissues via autolysis 4⁰C (Bloom et al., 1998). Nematocysts will be collected, centrifuged, and rinsed thrice, before rupturing (releasing the venom) with a mini glass bead mill beater (Carrette & Seymour, 2004). Centrifugation will be used to remove capsular debris, and the resulting supernatant, consisting of the venom will be freeze dried. The lyophilized venom will then be reconstituted with ultrapure water and examined for its protein concentration (using a Bradford’s Assay) and venom profile and composition (using SDS-PAGE, Fast Performance Liquid Chromotraphy (FPLC) and mass spectrometry). The resulting SDS-PAGE gels, FPLC and mass spectrum for bleached and unbleached sea anemones will be visually compared, looking for differences in venom characteristics such as protein size and peak intensity, indicating that bleaching had an effect.
Toxicity:
To test whether venom toxicity is impacted by bleaching, the venom of the remaining three sea anemones within each replicate tank will be collected, pooled, processed, and reconstituted using the methods outlined above for activity two. The xCELLigence method will be used to test and compare the toxicity of venom from bleached and unbleached sea anemones to zebrafish and insect (proxy for crustaceans) cells, indicative of natural predator and prey species. Simply, cells will be cultured and transferred into specialized 96 well E-plates that are under coated with a high-density gold electrode. As the healthy cells attach to the plate, they will inhibit the electrical current running along the bottom. xCELLigence software will be used to measure differences in electrical conductivity in real time thus providing a quantitative measure of cell health. As cells are exposed to the venom, toxicological effects will manifest as either morphological change and/or death. These changes will in turn be detected by xCELLigence as an increase in electrical current as their contact with the bottom declines. Comparisons in the toxicity will then be made between bleached and unbleached venom types.

I have currently published my literature reivew of this topic (https://doi.org/10.1016/j.toxcx.2022.100094) and have also completed the analysis of the cnidom of my model organism (manuscript currently in development). Additionally, though it is in beyond the scope of this PhD, I have also had a manuscript accepted (currently in Proof Status) the first instance of tentacle autonomy within Corallimoprharia (https://doi.org/10.17082/j.2204-1478.63.2022.2021-04)