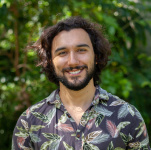 Understanding reef thermal evolution in the context of climate change

Kevin's main passion is statistical modelling/causal inference and he is always open and happy to form new collaborations. If you are looking for advice on which analysis to use for your data analysis, help with making advanced plots, or simply would like an extra set of eyes to look over your design – please reach out to him!

This project is important, given the current state of coral reefs, the future projected increases in sea surface temperatures and increasing frequency/intensity of bleaching events, and how few population models current take into account evolutionary processes that are likely to affect coral populations.