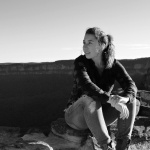 Masters by coursework
College of Science and Engineering

Masters by coursework
College of Science and Engineering
Vertical transmission of sponge symbionts: A driver for transgenerational acclimation?

Maria originates from the United States where she had completed her BSc in Marine Vertebrate Biology before she decided to continue her education at JCU. As an outdoor enthusiast, she spends her free time diving, volunteering and travelling. She dedicates her inspiration for life and happiness to the daily cups of caffeinated coffee which she enthusiastically consumes by the litre.

Vertical transmission of sponge symbionts: A driver for transgenerational acclimation?

She aimed to first create a baseline of the microbial community at early stages of development to assess any microbial population changes during larval metamorphosis through early development. She then aimed to answer whether vertical transmission can be a driver of transgenerational acclimation

Although vertical transmission of microbiota between sponge generations has been well documented, little is known whether this tolerance or acclimation can be passed on to future generations

Maria and her supervisor Heidi established the initial microbial baseline by collecting tissue from adults, larvae, recruits 24 hours post settlement as well as 6 days post settlement which were then extracted and sent for 16s rRNA amplicon sequencing.
From August 2017 to February 2018, her and her supervisor spawned adults subjected to experimental treatment, settled larvae, reared recruits and later transplanted recruits for the experimental component to the project which followed the IPCC RCP 6.0 future climate projections of combined pCO2 and temperature treatments. Maria then continued with extractions for 16s rRNA amplicon sequencing.

Maria had found that vertical transmission is visible based on the consistency of relative abundance of phyla present across each stage of development within the collected adult, larvae and recruit tissue.

Experimental results showed a similar story in consistent relative abundance of microbial populations across recruits of the same female sponge but instead found strong evidence of genotype effect in which genotype was the dominant determinant for recruit success rather than exposure.