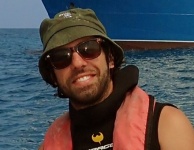 Paul has always had an interest in science. Going back to high school, Biology was among his favourite subjects and it was a natural progression to pursue this at University. Majoring in both Human Physiology and Zoology during his undergrad, he was unsure which direction he wanted to take, but eventually an interest in coral reef science took him to JCU. Here he developed a drive for research, and after a successful minor project studying coral-associated bacteria he decided to continue on at JCU with a PhD.

This project investigates evidence for coevolution and symbiosis in coral reef invertebrates and their microbial communities. In doing so, Paul aims to uncover microbes that are important for host health and find out their roles. Lastly, this project will evaluate to what extent host evolutionary history influences their microbiome.

Coral reef invertebrates rely on their microbial community to maintain their health and homeostasis. However due to the complex nature of these communities, researchers have been challenged to understand which members are beneficial, which are commensal and which may become harmful. This knowledge is necessary to understand the health and disease of keystone invertebrates such as reef building corals

This project will use integrated genomic techniques to investigate the microbiome of a range of invertebrates spanning different phylogenetic distances. Specifically, phylogenetics, metagenomics and metatranscriptomics will be used to identify potentially coevolved symbionts and understand the metabolic basis of those interactions

Paul hopes to find microbial lineages that mirror host phylogeny and indicate codivergence. He would then like to obtain the genomes of these microbes to understand the metabolic basis of their interaction. Samples are currently being sequences and therefore no analysis has yet been completed.