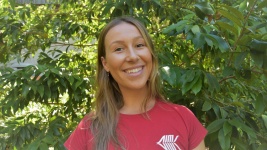 Taylor grew up fascinated by the temperate oceans in California. In pursuit to know more, she traveled to the University of Hawai'i and completed a Bachelor of Science in Marine Biology. Her passion for tropical marine research led her to Australia to complete a Master’s of Science in Marine Biology and Ecology at James Cook University. This research involved a collaboration with the Australian Institute of Marine Science isolating biochemicals from coralline algae to induce coral settlement. This research resulted in a first author publication and reinforced our understanding on how to manipulate settlement for restoration. Today, Taylor is continuing her research journey as an AIMS@ JCU PhD candidate with the Reef Restoration and Adaptation Program. Her research uses coral propagation and field deployments to underpin biological and environmental drivers of coral survival throughout recruitment; this will inform active interventions that plan to deliver corals to degraded reefs on engineered deployment devices.

Recruitment of coral larvae plays a critical role in the resilience and recovery of coral populations as the intensity and frequency of disturbances, such as temperature-induced coral bleaching, are increased due to anthropogenic climate change. Past research has strived to understand coral population dynamics by identifying the biological and environmental processes that underpin coral recruitment dynamics. However, there are many context-specific environmental drivers that influence the arrival and survival of coral propagules on reefs and these mechanisms are not adequately understood. This knowledge is needed prior to the implementation of direct restoration initiatives, such as larval enhancement and coral seeding experiments. Thus, assessing these drivers for reefs, such as those within the Keppel and Palm Island groups (Great Barrier Reef, Australia), that have experienced historically low levels of settlement and recruitment, is a key research priority. This project aims to test coral restoration and re-seeding methods across inshore and offshore reef gradients to identify drivers that cause differences in settlement and post-settlement survival dynamics. A mixed methodology approach will be used to pinpoint drivers of mortality and to test methods to maximise growth and survival of coral recruits to optimise cost-effective, field-based restoration that relies on the mass culture and settlement of diverse coral larvae.
This project will be undertaken as a collaboration between the Australian Institute of Marine Science, JCU, and the Reef Restoration and Adaptation Program (RRAP).

Recent restoration research has suggested that the addition of corals into the population via sexual reproduction provides a scalable and cost-effective potential method to restore reefs after disturbances. Coral recovery relies on the successful settlement of larvae and subsequent survival throughout the recruitment phase to reach reproductive maturity, where colonies can then contribute to future generations. Direct restoration initiatives aimed to facilitate rapid settlement, growth, and survival of sexually produced corals, such as larval enhancement and coral-seeding, have met with mixed success, with some efforts achieving greater than 50% recruit survival and the re-establishment of breeding colonies after 3 years. However, most efforts are not successful, and existing research has failed to identify the biological and environmental drivers that dictate recruit success or failure. Therefore, characterising the site-specific nature of processes and mechanisms influencing the survival of transplanted coral recruits on to reefs is necessary to implement cost-effective, field-based restoration.
Inshore reef environments, such as the Keppel Island group, have historically experienced acute disturbance events from freshwater flooding, high nutrient loads, and temperature driven mass bleaching. Yet, corals within this region have shown inherent resistance to these events, displaying higher calcification and growths rates with the ability to rapidly regenerate from remnant coral tissues after bleaching mortality and subsequent agal overgrowth. However, reef recovery through the addition of coral larvae has been limited by naturally low levels of settlement and recruitment. Although Keppel Island coral populations show some resilience to disturbances, recent studies suggest that even the most resilient reefs are not able to withstand repeated disturbance events exacerbated by anthropogenic climate change without the addition of new recruits into the population. Therefore, this project will aim to understand and identify the limitations to recruitment in the Keppel Islands and other inshore and offshore reef assemblages, to 'pin-point' the drivers of recruit mortality, and to develop re-seeding techniques to overcome this post-settlement mortality bottleneck.

Field experiments will be undertaken with newly settled coral spat (mass-spawning events) and laboratory-generated micro-fragments deployed to reefs on engineered devices. Experiments are designed to investigate the interactive effects of fish grazing with environmental variables, including hydrodynamics and fishing pressure, to describe context-specific relationships between coral survival and grazing fishes. I will model coral responses to the variables of interest (i.e. predator fishes, wave energy, sediment, light, benthic competitors) and identify thresholds in those responses where they exist to describe their relationship. Results of these field experiments will inform our understanding of ‘what’ (i.e. device type), ‘who’ (i.e. coral life stage, species), ‘when’ (i.e. coral size, age), and ‘where’ (i.e. environmental reef gradients) to deploy for restoration.

This project hopes to find discrete biological and environmental variables linked to recruitment success across multiple coral species and reef habitats. This information will then be used to optimize coral re-seeding devices to be used in large-scale direct restoration initiatives. Since the project is in the beginning stages, device trialing and recruit-grow out have not been started yet. However, 250, 000 Acropora digitifera larvae have been reared from the March/Autumn coral spawning event and they will be mass-settled on herbivore exclusion and non-exclusion devices for an August deployment to Davies reef, Central Offshore, GBR. This marks the first successful attempt at culturing A. digitifera larvae at AIMS and the project will greatly benefit from the addition of an Autumn spawning coral to compare with the mass-spawning events in Summer (October/November).