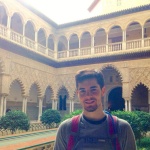 Alfonso was born in Huelva, in the southwest of Spain. Since he was a child, he was fascinated with the marine realm and moved to Australia in 2014 to study a Bachelor of Science majoring in marine biology at JCU. During his studies, he became fascinated with biodiversity patterns. In 2018, he did an honours project looking at the ecological processes behind patterns of abundance of species under the supervision of Sean Connolly and Tobin Northfield. He is currently doing his PhD at JCU under the supervision of Sean Connolly, David Bellwood, Hugh Sweatman and Mike Emslie, looking at the spatial and temporal biodiversity patterns of reef fishes from an ecological and phylogenetic perspective. In his project, he aims to compare community ecological and phylogenetic measures of biodiversity, and to evaluate which processes are driving these biodiversity patterns.

This will contribute to develop a much-needed biodiversity theory. Such theory is necessary to better understand whether and how ecological interactions will influence the way species respond to the present and future environmental challenges they are exposed to.

At this time the specific methods involved in this project are not fully completed. However, this project will have two broad components. One will focus on the spatial aggregation patterns and another on the temporal diversity patterns. Similarly, there will be data analysis components and process-based modelling components. This project will use existing data for the empirical component, from the long-term monitoring program from the Australian Institute of Marine Science (AIMS), as well as previously published phylogenetic trees and trait values.


1) The general methodology for the spatial aggregation pattern will be:

• To develop a phylogenetic aggregation statistic, which quantifies how the spatial variances in species abundances are correlated in space.

• To test whether species are phylogenetically aggregated at local scales, and determine the strength of that aggregation.


2) The general methodology for the spatiotemporal diversity patterns will be:

• Calculate the abundance-based and phylogenetic based diversity measures and determine how they change over time and space.

• Calculate functional diversity, determine its change in communities over time by using different sets of traits in the literature that define the different functional reef fish groups.


3) The general methodology for the process-based models:

• Formulate metacommunity phylogenetic similarity-based niche models introducing similar assumptions as above but taking into account the relatedness interactions based on phylogeny found in parts 1) and 2).

• Simulate time series data with spatial structure for both types of process based-models.

It is expected that some phylogenetic aggregation pattern will be found, with more related species more strongly aggregated than distant species in their evolutionary history.

There are some theories about the different mechanisms that produce some of the ecological patterns seen in nature. However, it is unclear if the same processes will drive the patterns of phylogenetic diversity that will be explored in this thesis.