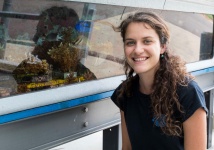 Emma completed her Bachelor degree in Biology and Master degree in Marine Biology at the University of Padova (Italy). She performed her Master research at the University of Adelaide (Australia), where her project investigated the effects of ocean warming and acidification on predator-prey interactions. Following graduation, Emma gained extensive experience in the field of molecular biology at the marine institute CCMAR (Portugal), where she studied the microbial communities associated with the gastrovascular cavity of corals through quantitative genetic approaches. Afterwards, she extended her knowledge in microbiology by participating in the broad Evolution 21 project at the Australian Institute of Marine Science.

The project aims to 1) define the functional role of the microbiota in several reef species, 2) investigate the microbial changes throughout host developmental stages, 3) characterize the role of microbes in holobiont tolerance to future ocean warming and acidification, and 4) explore mechanisms of microbe-mediated transgenerational acclimatisation in reef species.

Significant declines in coral reef health and diversity are predicted for the coming decades unless reef species adapt or acclimatize to increased environmental pressures. Although microorganisms can respond very rapidly to changing conditions, the microbial contribution to adaptation of reef species is poorly explored. The project will characterize whether microbes can contribute to the adaptive capacity of several reef species to climate stressors, providing critical information for forecasting reef ecosystem resilience to environmental perturbations.

Experiments will be performed in the AIMS SeaSimulator to investigate microbial contributions to the acclimatisation of reef species (corals, sponges and sea urchins) to ocean warming and acidification. 16S rRNA gene sequencing, metagenomics and metatranscriptomics will be employed to characterise environment-driven microbial changes at the taxonomic and functional levels.