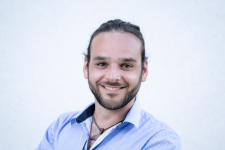 Growing up in Germany, far from the sea, Ingo has developed a great passion for tropical marine life in general and for sharks in particular, ever since he dived the Great Barrier Reef for the first time. After serving five years in the military, he pursued his bachelor degree in Environmental Management at Justus Liebig University in Giessen, Germany, where he investigated the uptake of microplastic by reef building corals. In 2020 he graduated with a master’s in Marine Environmental Sciences from Carl von Ossietzky University of Oldenburg, Germany. During his master’s, Ingo completed an exchange semester at JCU in Townsville in 2019 as well as a research project on shark tracking with his now PhD advisor. For his master’s thesis, Ingo travelled to Guam and investigated the toxicity of chemical pollutants to coral of different life stages. Since graduating, he has continued working on his thesis project as a research assistant at the Institute for Chemistry and Biology of the Marine Environment (ICBM). Ingo is also a passionate diver (instructor and certified scientific diver) and underwater photographer. He is very grateful to have received an AIMS@JCU scholarship and is keen to commence his PhD in June.

Drivers of Migration and Habitat use of Marine Predators

The PhD project aims to provide components of greater detail to the broader IMOS project – specifically integrating additional datasets with ecological data to better understand connectivity and drivers of movement for species of fishery, societal and conservation concern. Migration in marine species influences ecological processes from individuals to ecosystems, and migration strategies can vary between and within species and are affected by abiotic and biotic influences. However, there is a lack of information explaining the underlying ecological and biological mechanism that drive migration of marine species and how anthropogenic disturbances may destabilize these patterns. Ingo will use animal-borne telemetry complemented by biotic and abiotic variables to determine drivers of migration for multiple marine predator and prey species and model future changes to habitat use patterns influenced by forecasted anthropogenic changes such as climate change, habitat degradation, pollution and shifting resources.

Knowledge gained from this project will advance our understanding of migration processes, and will provide a framework for predicting and measuring the underlying mechanism that drive migration, and how anthropogenic disturbances (climate change, habitat degradation, pollution) might impact the movement patterns of marine species. This research will therefore have significant implications for the management and conservation of marine predator species that play important ecosystem roles
across their distributions.

The project will investigate the drivers of migration for a number of marine species using animal-borne telemetry (acoustic and satellite) and environmental and biological parameters. An extensive acoustic receiver array is currently deployed along the east coast of Queensland which enhances existing Integrated Marine Observing System (IMOS) infrastructure in place around the coast of Australia. The project will focus on the coverage of this array from the far northern Great Barrier Reef to southern NSW. Multiple shark and teleost species will be tagged with acoustic transmitters as part of the broader Qld project to study their movements along the east coast. For larger shark species (i.e., tiger, bull and hammerhead sharks) satellite tags will also be used to complement acoustically tracked movements. In addition to biological data which will be collected on-site, environmental data from the IMOS national moorings network as well as satellite derived remote sensing data stored at the Australian Ocean Data Network will be accessed.
Tracking data will be analysed in combination with environmental and biological data to address the questions on the underlying drivers of dispersal. Quantitative analyses will be performed using existing R packages and will include animal movement analyses (state space models, Kernel analysis, dynamic Brownian bridge movement models) and models that incorporate biotic and abiotic variables to identify factors that best explain observed movement patterns (e.g., generalized additive mixed models (GAMMs), conditional inference trees and random forests). Future climate change variables (e.g., predictive sea surfaces temperatures under different IPCC scenarios for 2050 and 2100) accessible through the NOAA climate change web portal, will be included in the models, as well as other predictive anthropogenic influences (e.g., habitat changes, resource shifts, pollution) for the forecast of future range shifts in the observed patterns.

Ingo hopes to advance our understanding of underpinning drivers of movement patterns for several marine predators in order to predict future changes in these patterns. The outcome of this project is expected to provide novel quantitative insight of marine predator movements and will help to better manage and protect marine predator species in the light of a changing environment.