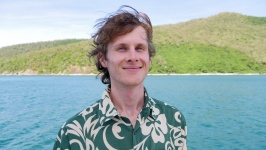 Pursuing his childhood dream, Kelsey moved from Brisbane to Townsville to study Marine Biology at James Cook University in 2016. After completing his Bachelor’s degree, he was fortunate enough to join Distinguished Professor Geoffrey Jones’ research lab for an Honour’s project on macroalgae and fishes in Kimbe Bay, Papua New Guinea in 2019. He is now furthering his research experience in a similar field with a PhD project under the supervision of Andrew Hoey (JCU), Katharina Fabricius (AIMS) and Morgan Pratchett (JCU).

High abundances of macroalgae are typically regarded as signs of degradation on coral reefs. However, macroalgae can serve important functions even on healthy, coral reef ecosystems. Their provision of habitat and food supports many reef species, particularly juvenile fishes, however relationships between tropical macroalgae and the structure and function of fish communities remain underexplored. This project will relate temporal and spatial variation in tropical macroalgal assemblages to that of associated fish assemblages, test the influence of macroalgal structure on juvenile fish recruitment, and investigate relationships between fish herbivory and macroalgal composition in natural and experimental settings.

Relationships between macroalgae and the structure and functions of reef fish assemblages are currently understudied. Although macroalgae and macroalgal dominated habitats are not new phenomena on coral reefs, understanding the influence of macroalgae on coral reef ecosystems is becoming increasingly important due to global declines in coral cover and increases in macroalgae. Since macroalgae have begun to be recognised as important recruitment habitats for a range of fish taxa, including important fisheries targets, the enhancement of the knowledge base on fish-macroalgal associations provided by this project will allow stronger evaluation of how future changes in tropical macroalgae populations could influence fisheries. In addition, macroalgal assemblages can influence the important ecological process of herbivory both indirectly, by providing habitat and food to herbivorous species, and directly, by influencing the distribution of herbivorous fish feeding activity. This study will further our knowledge on these relationships, which may allow reef benthic dynamics, moderated by the process of herbivory, to be better predicted.

A combination of observational and experimental field data will be collected in this project. A one-year fish and macroalgal assemblage survey series will be conducted to assess seasonal and spatial variation in fish macroalgal relationships. Video sampling of herbivorous fish feeding activity in macroalgal dominated habitats will also be conducted to assess relationships between macroalgal taxonomic and structural composition and herbivory in natural settings. The first of two macroalgal patch reef experiments will compare the relative effects of macroalgal structural characteristics on recruitment by juvenile reef fishes. The second will assess the influence of macroalgal structure on grazing by fishes beyond the edge of macroalgal patches.

Based on his review of the literature and preliminary data collection, Kelsey expects his thesis to reveal both temporal and spatial shifts in fish assemblage compositions. This work may also reveal ontogenetic shifts in habitat and/or reef zones by fishes believed to recruit to macroalgal dominated areas during summer, as well as preferences by these fishes for different aspects of macroalgal structure, such as height, density and biomass. Herbivory rates in natural macroalgal dominated habitats have seldom been studied, and Kelsey’s investigation into this area may lend support to experimental work suggesting that structural complexity of macroalgae is highly influential on herbivorous fish feeding, or, alternatively, highlight the importance of macroalgal taxonomic composition in driving herbivory rates. Finally, he expects to find that the influence of macroalgae on herbivory extends beyond macroalgal patches, and this relationship may be moderated by the height of a macroalgal patch.