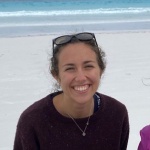 Martina Burgo grew up in Italy and moved to the UK in 2016 to complete her Integrated Masters (MSci) degree in Biodiversity and Conservation at University College London. Her Master’s research project investigated seagrass thermal tolerance to develop a predictive model of species’ response to marine heatwaves. Following her passion for marine biology, she moved to Australia and started her PhD in 2021 in 2020 at the ARC Centre of Excellence for Coral Reef Studies (JCU) and AIMS.

Effects of macroalgae on coral recruitment, growth and mortality across space and time

Loss of coral cover is often accompanied by increases in algal assemblages that compete with corals for space, reducing reef recovery potential. Most research has focused on small-scale experiments on limited algal taxa and the dynamics of coral-algal competition remain largely unknown. This project will explore the effects of different macroalgal functional group on coral settlement and recruitment and their long-term effects on coral growth and mortality. The project will incorporate environmental data to understand the effect of anthropogenic pressures, disturbances and climate change on coral-algal dynamics.

Coral reefs are under pressure due to climate change and human activities. Degraded reefs often become macroalgal-dominated and exhibit reduced structural complexity and biodiversity. The ecological resilience of reefs depends on coral ability to re-establish in macroalgal-dominated habitats and specifically on coral larval supply, recruitment success, coral growth and mortality. Understanding the effect of macroalgae on coral life stages will fill key knowledge gaps essential for the success of reef restoration interventions.

Previous studies suggest that the mechanisms of coral-algal competition vary depending on functional groups, algal species, coral life stages, species and size. In adult corals, allelochemicals from macroalgae are the most effective in outcompeting corals, inducing coral bleaching and diseases. The mechanisms limiting coral recruitment in macroalgal-dominated habitats are less known and could involve a combination of physical and chemical processes. Studies also suggest that the intensity of coral-algal interactions will increase with reef degradation, climate change and eutrophication. This projects aims to better understand the role of varying mechanisms of competition in determining community composition on coral reefs.