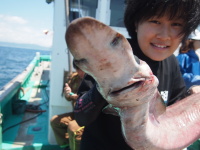 PhD
College of Science and Engineering
Habitat use, movement patterns and trophic ecology of sharks and rays within mangrove areas

Shiori Kanno was studying marine biology and ecology at James Cook University for her master’s degree. She was doing minor research project on stingray’s fine-scale habitat use within a mangrove-associated intertidal bay using a stationary video transect method. She is interested in how sharks and rays are connected with an ecosystem, i.e. habitat use and trophic ecology at fine to broad time scale. She also has been studying shark’s palaeontology since her undergraduate. Both living and extinct shark’s knowledge stimulates her curiosity about the importance of ecosystem to sharks and rays living in a habitat they choose.

Habitat use, movement patterns and trophic ecology of sharks and rays within mangrove areas

The project will investigate how sharks and rays (elasmobranchs) are using mangroves and adjacent habitats. Following faunal survey to examine which species are dependent on mangrove habitats, spatial ecology will be investigated using acoustic telemetry for short (i.e. daily) and long terms (i.e. monthly or seasonally). Telemetry will reveal whether shark’s habitat use within mangrove habitats varies in biotic and abiotic factors, such as tide, season, temperature, water clarity, presence of predators and prey density etc. Long-term monitoring may represent the presence of shark’s nursery within mangrove habitats. To examine feeding ecology and its correlation to habitat use, dietary analysis and prey community sampling will be conducted in mangroves and adjacent habitats. The data of trophic ecology will demonstrate whether mangroves are utilised as a feeding ground for sharks and rays. The importance of mangroves to elasmobranchs has been poorly paid attention despite the declining status of world mangroves. Better understandings of the ecological roles of mangroves and elasmobranchs are required to be used for conservation of elasmobranch species and protection of mangrove habitats.

Mangroves are highly productive habitats offering various essential services and host high biodiversity. However, mangroves have been degraded globally for the last three decades mainly due to coastal development and human use. Mangrove habitat loss will severely affect inhabitants’ survival and population. To predict how mangrove loss affects elasmobranch species that are dependent on mangrove habitats, comprehensive knowledge of the importance of mangroves is essential. Previous researches did not investigate direct utilisation of mangroves by elasmobranchs and studied species and locations are quite limited. This project will reveal the importance of habitat functions and how elasmobranchs are directly interacted with mangroves. Better understandings of species-, regional- and conditional-specific habitat use will be a basis of effective management and conservation both of mangroves and elasmobranchs.

Faunal surveys will be conducted to understand the elasmobranch fauna in study sites and to choose focal species for this project prior to telemetry and prey surveys.
Acoustic telemetry will be used to investigate habitat use and movement patterns of target species. Using both manual tracking and passive monitoring methods will reveal fine temporal-scale movement (e.g. tide-associated), diel movement (e.g. day and night) and seasonal change (e.g. warm and cold seasons) in spatial ecology of each species. For fine temporal-scales, acoustic manual tracking is used, where an acoustic transmitter is attached to an animal externally and the tagged animal is tracked actively using a directional hydrophone and an acoustic receiver. For broader temporal-scales, passive acoustic monitoring is used, where a transmitter is implanted surgically and the acoustic signal is detected by an array of receivers placed underwater in a study site. Acoustic telemetry data are used for habitat mapping (visually demonstrated movement patterns) using a Geographic Information System (GIS) and estimation of certain indices and parameters (e.g. residency index, rate of movement and activity space). The parameters are used to analyse if they are different among species, between tidal stages, across time of day and across season.
Stomach content analysis, prey sampling and stable isotope analysis will be conducted to examine trophic ecology of target species. Stomach content analysis will reveal prey species and amount of food consumed by species. Prey sampling surveys will be conducted simultaneously at each study site to investigate the correlation between prey density and habitat use and movement patterns of species. Differences in prey density among habitat types will be compared and the correlation between spatial ecology (e.g. temporal change in abundance, residence time) and prey density will be analysed. Using stable isotope analysis will detect trophic position of species within mangrove ecosystems and the ultimate source of prey. This method is useful to track long-term feeding ecology of animals that reveals ontogenetic feeding shift and preferences.