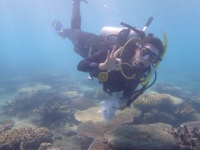 PhD
College of Science and Engineering
The genomics of bleaching tolerance in a common reef-building coral: Acropora tenuis

Raised on the tropical island of St. John in the USVI, Hillary has always had a penchant for ocean life. Following a career in the fine arts, Hillary decided to return to school to pursue a more engaging and satisfying career path and completed a Post-Baccalaureate program in Ecology, Evolution and Environmental Biology at Columbia University. During this program, Hillary became fascinated by genetics and genomics, and focused her studies on conservation genetics. Hillary then moved to Townsville to complete a Master of Science in Marine Biology at JCU, focusing her research on adaptive and functional genetics in corals. Since completing her MSc, Hillary has gone on to hold a wide variety of research roles, with her most recent work focused on the role of microbes in coral health and climate change.

The genomics of bleaching tolerance in a common reef-building coral: Acropora tenuis

Hillary’s work will use next-gen sequencing and computational tools to identify genes and traits associated with bleaching tolerance in the coral Acropora tenuis, and will identify if specific gene variants underpin survival. Time-series genomic data will be used to investigate if the frequency of beneficial gene variants changes following extreme disturbance.

Hillary’s work will form the basis of evolutionary and climate change modeling and spatial planning, and will fill critical knowledge gaps for assisted gene flow and selective breeding programs.

Next generation sequencing, genome-wide association studies (GWAS) and gene expression analysis will be used to identify genes and traits correlated to stress tolerance. The use of tagged coral colonies in the field will allow for a control of natural genetic variation while exploring the functional response of genes to stress.

Hillary hopes to establish an “encyclopaedia” of beneficial gene variants that underpin key stress responses. This “encyclopaedia” will form a quantitative resource for the inclusion of adaptive capacity and genetic diversity data in the conservation and management of the GBR. She hopes that her findings will provide real-life context for reef restoration.