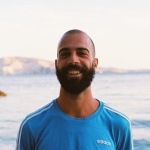 Marko completed his Bachelor degree in Biology (summa cum laude, GPA: 9.80/10.00) at the University of Belgrade (Serbia), and was awarded the ‘best student award’ for his academic achievements. Aiming to learn more about the fascinating world of coral reefs, he later enrolled the IMBRSea program as an awardee of a prestigious Erasmus Mundus scholarship and obtained a joint Master’s degree from ten European universities in Marine Biological Resources (magna cum laude). During his nomadic life as an IMBRSea student, Marko had the privilege to study in various countries across Europe (Spain, Belgium, Italy, Portugal, Sweden and France) and has met inspiring people from all over the world, which is something he is eternally grateful for.
Marko ventured into the world of bioinformatics during the last semester of his IMBRSea journey, which he spent in Townsville at the Australian Institute of Marine Science (AIMS). At AIMS, Marko did his Master thesis project entitled ‘Exploring how symbionts of the model reef sponge Ircinia ramosa respond to the combined effects of ocean warming and ocean acidification using metatranscriptomics’, under the supervision of Dr. Nicole Webster, Dr. Patrick Laffy and Dr. David Bourne.
Now hooked on bioinformatics, Marko took on a data-analysis oriented research fellowship position at the University of Bologna upon completion of his MSc program, where he used population genetics & genomics to investigate population connectivity patterns in 3 soft coral species from the Mediterranean Sea and North Atlantic - Antipathella subpinnata, Parazoanthus axinellae and Savalia savaglia, and based on various molecular markers - COI and ITS genes, RAD-Seq data. Marko feels incredibly honoured to have been awarded an AIMS@JCU PhD scholarship, and is thrilled to be back in the AIMS ‘sponge group’ and supervised by the same supervisory team.

Marko's PhD forms part of the largest sequencing effort by Australia to characterise and monitor free-living (seawater & sediment) microbes in the GBR - the initiative that aims to generate two exceptional pieces of Queensland research infrastructure: (1) the Integrated Marine Observing System Microbial Genomics Database (IMOS-MGD), and (2) the Integrated Marine Observing System Microbial Observatory (IMOS-MO) stations. The IMOS-MGD database will characterise free-living marine microbes in the GBR by producing 10 000 microbial (from Bacteria, Archaea and viruses) genomes, from seawater and sediment samples collected in 48 offshore/midshelf reefs across the entire GBR. The IMOS-MGD database will become available to the broader scientific community as an open-access genomic resource. The IMOS-MO microbial observatories will be established at key inshore and offshore reef sites within the IMOS network, to monitor how microbial processes shift across space and time. In his PhD, Marko will integrate the extensive metagenomic and metatranscriptomic data (obtained within IMOS-MGD and IMOS-MO infrastructures) with environmental and oceanographic measurements to identify how microbial activity is changing with shifting environmental parameters in the GBR, on an unprecedented scale.

Metagenomic and metatranscriptomic data will initially be analysed separately using existing computational methods and bioinformatics tools, and later bought together into a single computational workflow that includes measurements of environmental and oceanographic metadata to identify how microbial activity is changing with shifting environmental parameters.