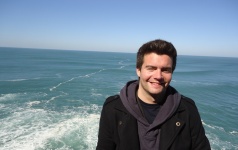 Rodrigo's main fields of research are population connectivity of marine organisms, including genetic and hydrodynamic connectivity, as well as population ecology of coastal fish. He completed a BSc (Hons) in Biological Sciences (Oceanography) at the Faculty of Sciences of the University of the Republic of Uruguay. After this, he worked as a research assistant for a few years at the Oceanography and Marine Ecology Department of the same institution. During this time, he also studied the structure and functioning of estuarine fish assemblages, by undertaken a MSc in Geosciences. Rodrigo's research is expected to contribute to the conservation and sustainable management of marine organisms.

The project will estimate the inter-annual (including different ENSO events) and subseasonal (during different moon phases) variability of larval dispersal and connectivity levels of L. carponotatus on the GBR, by biophysical modelling. Finally, the larval connectivity patterns will be compared to the genomic population structure results.

Larval transport is a critical stage for connectivity, recovery and persistence of marine populations. Larval connectivity of marine organisms can be affected by the dynamics of the marine environment. With relatively small home ranges and a relatively long pelagic larval phase, the model reef-associated fish, L. carponotatus is dependent on currents to link their GBR sub-populations. By using genomics and hydrodynamic modelling tools over time, a comprehensive understanding of the connectivity dynamics of larval fish along the GBR will be presented for the first time. A better understanding of these dynamics and interactions between environmental and biological systems will enable effective designation of MPA networks and management policies for marine organisms along the world's largest coral reef ecosystem.

Tissue samples from adults and recruits collected along the GBR were sent to Diversity Arrays Technology for SNP genotyping. The genetic connectivity will be quantified by evaluating the population genomic structure applying population genetic analyses to outlier and neutral SNP data. The hydrodynamic connectivity of L. carponotatus larvae will be estimated along the system by using the eReefs hydrodynamic ocean model and particle tracking techniques, from 2010 to present.