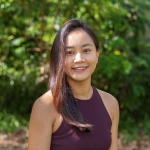 In 2013, driven by her enthusiasm towards the ocean, Sarah left her job as a pharmacist in Hong Kong to pursue her passions by working as a Scuba Diving Instructor. She has since worked at the Great Barrier Reef and in the Maldives. After witnessing the 2016 mass bleaching event right before her own eyes, she was inspired to become a Marine Biologist so that she could dedicate herself to working for coral reef protection.

Eventually, she moved to Australia to pursue her MSc in Marine Biology at James Cook University (JCU) in 2019. She has conducted her Master thesis project entitled “quantifying shedding and degradation rates of environmental DNA (eDNA) from Pacific crown-of-thorns seastar (Acanthaster cf. solaris)” at the Australian Institute of Marine Science (AIMS). During this period of time, Sarah has developed a keen interest in the field of scientific research and thus decided to continue her academic pursuit through a PhD.

Sarah is incredibly grateful to have been awarded the AIMS@JCU PhD scholarship in 2021. Her research focuses on the development and application of novel genetic techniques to improve the management of crown-of-thorns seastar (CoTS) outbreaks on coral reefs. Specifically, she is aiming to develop a molecular age marker for CoTS by making use of DNA methylation patterns or telomere lengths. In addition, she is passionate about the application of the metabarcoding approach to obtain population-level insights from eDNA samples. Her supervisory panel includes Dr. Sven Uthicke (AIMS), Prof. Morgan Pratchett (JCU), and Dr. Cecilia Villacorta-Rath (TropWATER).

The overall objective of this project is to develop and apply novel genetic tools to answer critical questions about age structure and genetic diversity of crown-of-thorns seastar (CoTS) that were previously intractable. The first part of the project involves development of molecular aging marker for CoTS based on DNA methylation patterns or telomere lengths. In addition, sensitive mitochondrial or nuclear DNA markers will be established to investigate intraspecific genetic diversity of CoTS through environmental DNA (eDNA) samples with a metabarcoding approach.

Estimating the age of juvenile and adult CoTS is a major knowledge gap to understand CoTS population outbreaks. The development and application of molecular age marker will help validate previous age estimations and provide a clearer picture of outbreak population age composition. When successfully established, eDNA metabarcoding approach will provide a cost- and time-effective alternative to traditional methods in obtaining population-level genetic data. Ultimately, the results of this research will help improve the monitoring and management of CoTS outbreaks on the Great Barrier Reef (GBR).

CoTS larval culture experiments at AIMS will allow access to lab reared animals of known age for the development and verification of molecular age marker. Recent research has demonstrated successful development of epigenetic markers for age determination in vertebrates using the digital restriction enzyme analysis of methylation (DREAM) method, which measures DNA methylation levels at CpG sites throughout the genome. Measurement of telomere length (TL), on the other hand, is another commonly used biomarker of age. Telomere restriction fragment (TRF) analysis and telomere qPCR are the two main methods employed by ecologists to measure TL.

Utilizing recently developed primers, fragment of the mitochondrial cytochrome c oxidase subunit 1 (CO1) gene will be tested through PCR amplification and sequencing for haplotype frequencies. New markers will be developed if CO1 gene is not variable enough to describe genetic diversity. For example, the D-loop region of the mitochondrial genome of CoTS and other seastars, as well as nuclear DNA markers such as the ITS region can provide key population-level information.

Given that previous research has detected age-related changes in DNA methylation pattern and telomere length in echinoderms, there is a high certainty that molecular age marker of CoTS can be successfully developed. Recent research has also demonstrated great promise in obtaining population-level inference through eDNA metabarcoding approach in marine organisms. The data arising from this project will greatly improve our knowledge in age structure and genetic diversity of CoTS.